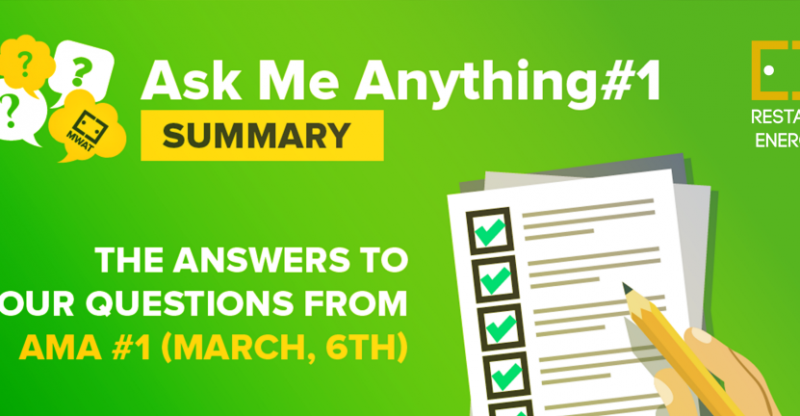 First of all, thank you all for tuning in last night for our first AMA (Ask Me Anything) session. Armand Doru Domuta (CEO) and Andrei Avram (CTO) were delighted to answer your burning questions.

Secondly, we apologize for the sound issues — clearly a conference room wasn’t the best idea. We promise you a more professional session next time.

For those of you who couldn’t join us or had trouble understanding parts of the video, we’ve put together a transcript of the questions covered and the answers given.

“In the next two/three months what will be your biggest challenge/challenges to achieve?”

Great companies and successful projects are developed by great people working together as focused teams. That means the biggest challenge is always finding and managing the right people for the entire value chain from product or service development to marketing and sales.

*Restart Energy is hiring. Please read this article and access the section about the positions we have available to find out more and how you can apply.

“Is there a strong demand for franchises by larger, established companies and would there be the possibility to move up the timeline from the roadmap to expand faster?”

We’ve had over 200 applications so far and out of those 30 were for type A franchise. There are also requests coming from corporations. Interestingly, the top three countries from which we’ve received applications are: the United States, the United Kingdom, and Australia.

They could, but for this reason, we have proposed the new RED Token Renting System (TRS) to alleviate such potential issues. Read more about it here.

“Is the required amount for a franchise fixed in MWAT, or in USD?”

Franchises are acquired with MWAT tokens only, for the time being.

“What about the platform — could we get some more details about it? I think that having the platform would be a crucial step, so perhaps more information about upgrades, process, description how the platform is being built would be useful.”

We are planning to feature a sneak peek of the RED Platform very soon — it will be where MWAT owners will be able to vote for or against the RED-TRS proposition. It is better to see than tell, right?

“Not sure whether you would have to pay once for a master franchise and then build as many through the country as you like for free, or whether you have to buy MWAT also for each of those.”

Depends on what type of franchise license you acquire.

If you get a Type A franchise — these allow you exclusive country-wide expansion and you can set up as many ancillary businesses within the county as you see fit.

If you buy a Type B franchise, then you’re limited to either city, region, or country — based on your tier. You can set up as many places of business within these parameters as you want and are able to.

For example, if you own a Type B reseller/broker city franchise and want to expand to another region, then you will need to acquire the rights for that region as well. But if you have a Type B regional franchise, you can set up places of business in all cities/towns within that region.

Apply for a franchise here.

“Why is the team not focussed on marketing? It’s an important part of the business and one can’t afford to ignore it.”

We are working on marketing strategies, however many of these are under-the-hood technical visibility aspects of our marketing — SEO, for example.

We come from an energy sector background and the marketing needs and wants of a crypto-based model were not as familiar to us initially as they are now. This is why we’ve changed our stance regarding country expansion updates — bringing you incremental updates of current expansion targets, rather than the normal-in-the-industry updates once everything is done.

Our background combined with the rapid growth of our community has taken us somewhat off-guard initially, but we are working diligently to attune ourselves to the communities expectations and exceed them.

“Concerning the platform and adapting it to the blockchain — which blockchain will be chosen? Ethereum right now is much too slow to use on a larger scale and your platform will work on such. How is this problem going to be resolved? Using another, faster blockchain, perhaps? If so, which one?”

The authentication system, including franchises, can easily be handled using the existing Ethereum main net. The energy exchange system, including the KWT tokens will work on a different system. We are trialling three providers for their blockchain technology and will announce a decision on this matter once we consider it final.

“Concerning the RED Platform again: is there a chance to have it be finished faster? From what I understand, the project depends on this platform.”

While crucial to the use of MWAT tokens within the ecosystem, the RED Platform software’s implementation and design will need their due time — these things cannot be rushed, as quality must be assured.

Furthermore, our expansion as a company and brand — with franchises and all that comes with them — is something we’re already successfully doing. We’re the fastest growing private energy company within the EU and have had over 1700% growth within our first two years of expansion.

Our growth will be boosted with the implementation of the RED Platform software and it will bring major changes to our users, yes, but it is by no means everything we have to offer — it is simply one part of a larger whole. Until it is done, we will continue to expand globally and supply energy as we have done for years now.

“In the whitepaper, it is stated that “Restart Energy offers integrated energy, gas, and fuel packages […]”. My question is: as a consumer, can I also purchase gas from the RED platform or only energy?”

To clarify: the term ‘energy’ stands both for ‘electricity’ and ‘gas’. We supply both, however, electricity distribution networks are almost universally available, while natural gas availability is more scarce; but we do also supply gas. In the first stage, the RED Platform will be developed for electricity trading and it’s possible that in the second stage we might also tokenize natural gas supply.

“As stated on page 15 and 16 of the whitepaper, will it be a problem when franchises are built in all stated countries and have 499,873,492 MWAT tokens locked. How will there be enough tokens for the platform to run?”

Depending on the expansion speed and token price, RED has the option to reduce or increase the minimum necessary amounts of MWAT for specific franchises.

“When will there be an updated whitepaper?”

The Website and Whitepaper are undergoing a renewal process to be in line with the integrated expansion strategy.

“Where are you in getting the product launch in Australia and other countries?”

Australia is a specific deregulated energy market, with very specific aspects. It has 4 major energy suppliers and more then 30 smaller private suppliers. While in recent years, many new companies attempted market entry in the retail of electricity, very few succeeded so the market entry in Australia needs to be very carefully planned.

As such, RED has commissioned a detailed market study of the Australian energy market and also started procedures for registering a local subsidiary. We expect to enter Australia sooner then planned and a JV with a local energy company is also a possibility.

You can see more updates on our global expansion in this article.

“Any new major partnerships made recently?”

We’ve recently started the process of acquiring two hydroelectric plants that generate a combined 20,000,000 KWh of clean energy per year. We will announce the full details on our Medium blog

This is it, for now. We hope that we’ve answered some of your questions and that you’ve taken at least one big idea from this article.

Until next time, make sure you check out Restart Energy’s latest article with updates on everything we’ve been working on from our global expansion roadmap to the RED platform. Read more here! 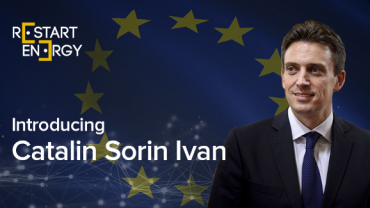